The confederate monument in downtown Franklin is owned by the Daughters of the Confederacy and was erected in 1899.  Under the Tennessee Heritage Protection Act, the removal would require a waiver from the Tennessee Historical Commission.  In 2018 state lawmakers approved a bill banning municipalities from removing historical monuments, removal would result in a financial punishment to the City. The bill bans municipalities who remove monuments from receiving grants administered by the Historical Commission and the State Department of Economic and Community Development for five years.  In 2019, despite a lawsuit from the Daughters of the Confederacy to prevent it, the City of Franklin, along with a community group, installed five historic markers depicting the African American experience in Franklin before, during, and immediately after the Civil War.  The five markers tell the story of an old courthouse on the square where slaves were bought and sold, the Battle of Franklin, the US Colored Troop Soldiers, the 1867 race riot that occurred in Franklin and Reconstruction.  A bronze statue of a United States Colored Troop will be erected on the square soon.

Below if the story of how five new historical Markers depicting the fuller story of the African American experience were placed on the Franklin Square in October 2019.

In  2017 the Ku Klux Klan held a “Unite the Right” rally after the City of Charlottesville, Virginia City Council voted to remove the Robert E. Lee statue from a City park.  The rally resulted in the death of a counter protester, Heather Heyer and numerous injuries.  After that incident questions were raised across the South regarding existing Confederate monuments. In Franklin, after the Charlottesville rally and the death of Heather Heyer, several citizens, including local clergy and historians got together on our City square for a peaceful candlelight vigil. 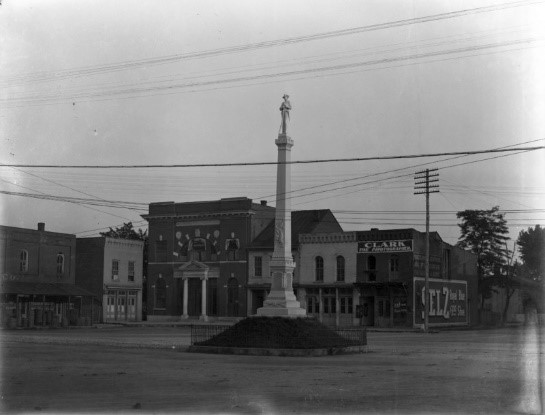 The Franklin downtown square features a confederate monument that was erected in 1899 to commemorate the 35th anniversary of the Battle of Franklin.  The Battle took place on November 30, 1864 and ended with 10,000 casualties in this town of approximately 900 people. It decimated the Army of Tennessee which was dealt its final death blow in Nashville a few weeks later.

The night of the candlelight vigil in 2017 on the Franklin Square sparked the conversation about how to move forward with telling the fuller story in Franklin, a different path than monument removal, a way to tell the African American side of the civil war history and aftermath, and to better educate citizens and visitors, and include everyone in the history that is shared in our City.

Three local pastors, Chris Williamson, Kevin Riggs and Hewitt Sawyers, and the City’s Battlefield Historian, Eric Jacobson worked for a year with City Administrator Eric Stuckey and Mayor Ken Moore to present the idea of the Fuller Story initiative to the Board of 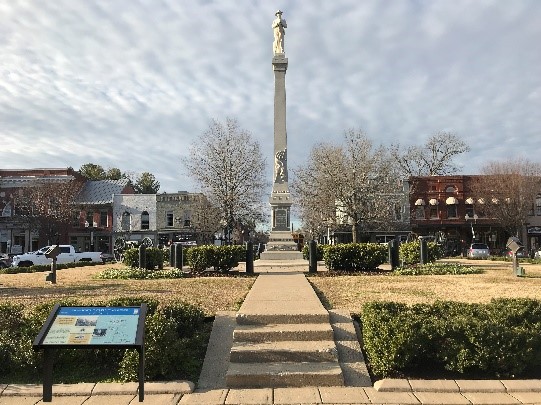 Mayor and Aldermen. Their idea included putting educational markers near the monument and around the square depicting the African American experience before and after the Battle of Franklin and erecting a bronze statue of a US Colored Troo 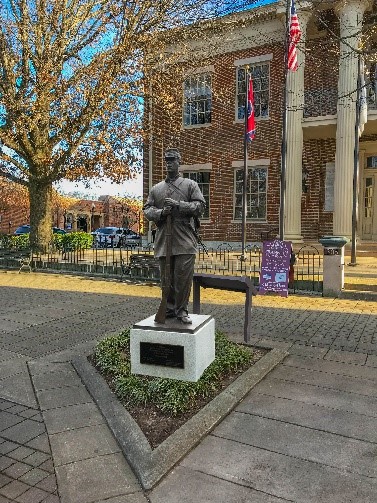 The five markers tell the story of an old courthouse on the square where slaves were bought and sold, the Battle of Franklin, the US Colored Troop Soldiers, the 1867 race riot that occurred in Franklin and Reconstruction.

The City Administrator met with each alderman to make them aware this idea was coming forward. The group gave their first presentation on August 14, 2018. At that time the board seemed to welcome the idea.  But as expected, many people on social media and through communications with the board expressed their concerns.   Some of those concerns were visibly racist, others wanted to know more about what would be put on the markers.

At the next Board Meeting, an attorney for the United Daughters of the Confederacy (UDC), the group who erected the monument in 1864, came forward to object to the markers being put on the square, because he claimed the UDC owned the square and the markers should be placed somewhere else.  After this revelation by the UDC, that same night, the Board of Mayor and Aldermen decided to file a Declaratory Judgement regarding ownership of the square.  The City claimed the City owned the square because of years of upkeep and improvements.  The City did not object to the UDC owning the land directly under the monument, but felt the City had the right to erect historical markers on the property around the monument.  While the ownership of the square was tied up in court the Board of Mayor and Aldermen approved a resolution supporting the Fuller Story Initiative on September 25, 2018.

Again many board members received push back from some community members about the location of the markers, and the information on the markers.  At a work session meeting on January 22, 2019, after the approved resolution, the board expressed their confusion and concern about the Fuller Story Initiative, especially with the ongoing lawsuit.  Finally, on February 26, the Board unanimously passed a detailed resolution regarding marker placement and the USCT statue. 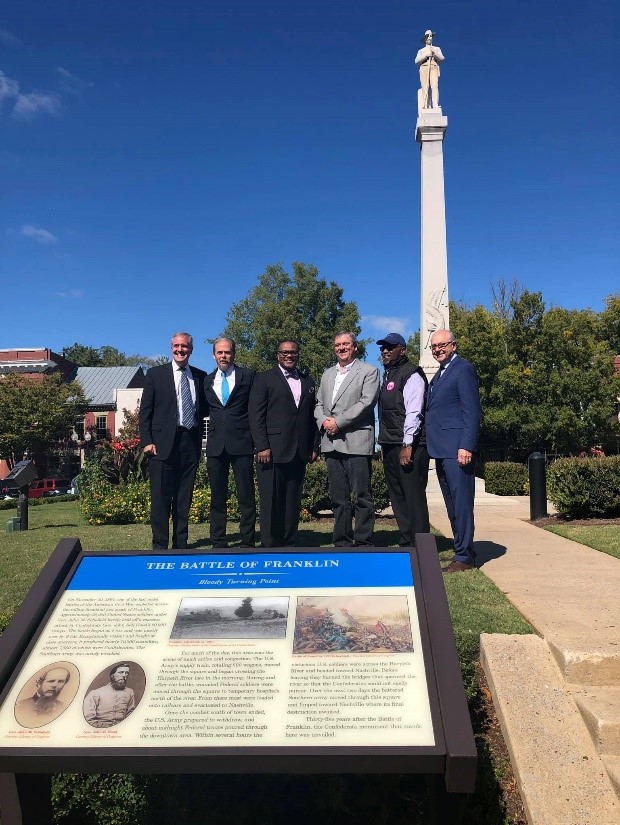 While the lawsuit was still pending, on October 17,2019, the City and Community Group worked together to unveil the Fuller Story Markers in the Franklin City Square.  Two markers were placed near the monument and three markers in front of the Historic County Courthouse where the bronze USCT statue will be placed in the future.  This was a valuable 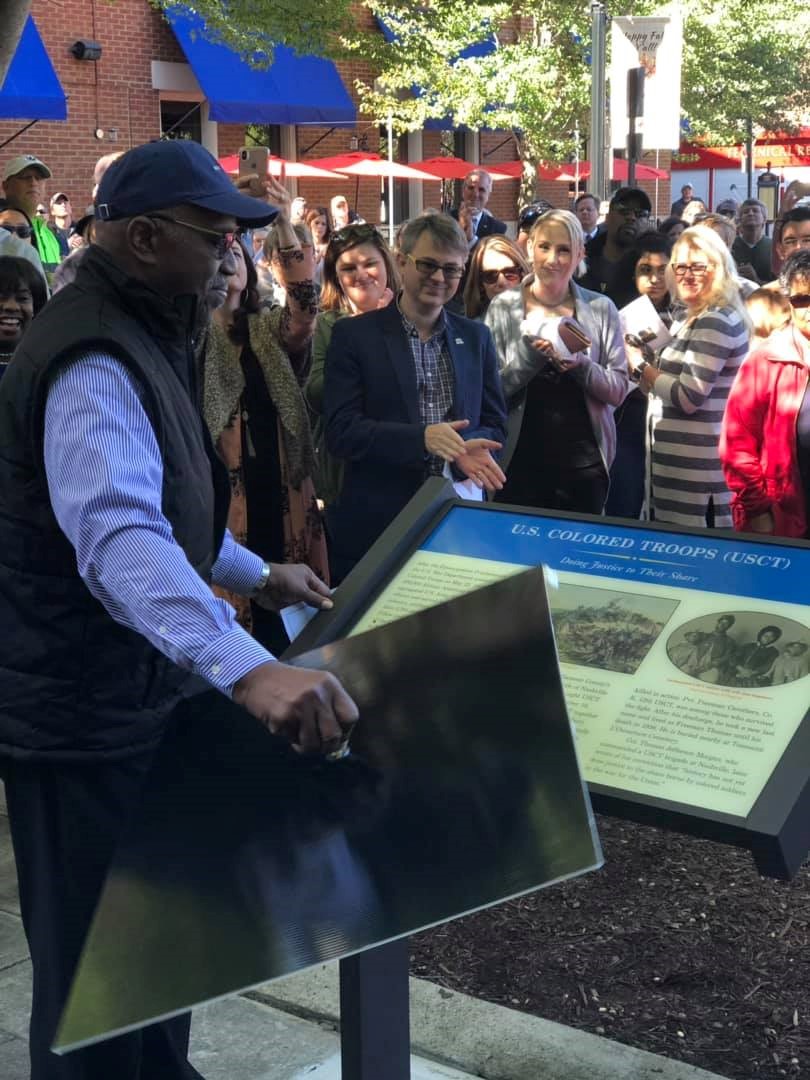 lesson and case study how local government can work with a community group to move an idea forward, through legal channels. The lawsuit regarding the ownership of the square is still ongoing.

While many other cities across the South have clashed with the community regarding civil war monuments. This partnership, between local government and community leaders, to tell the Fuller Story made national news and set an example of a different way communities can deal with their past.  Our local government and community partners, people of all races and backgrounds, came together to change how Franklin’s story is told to visitors and future generations.