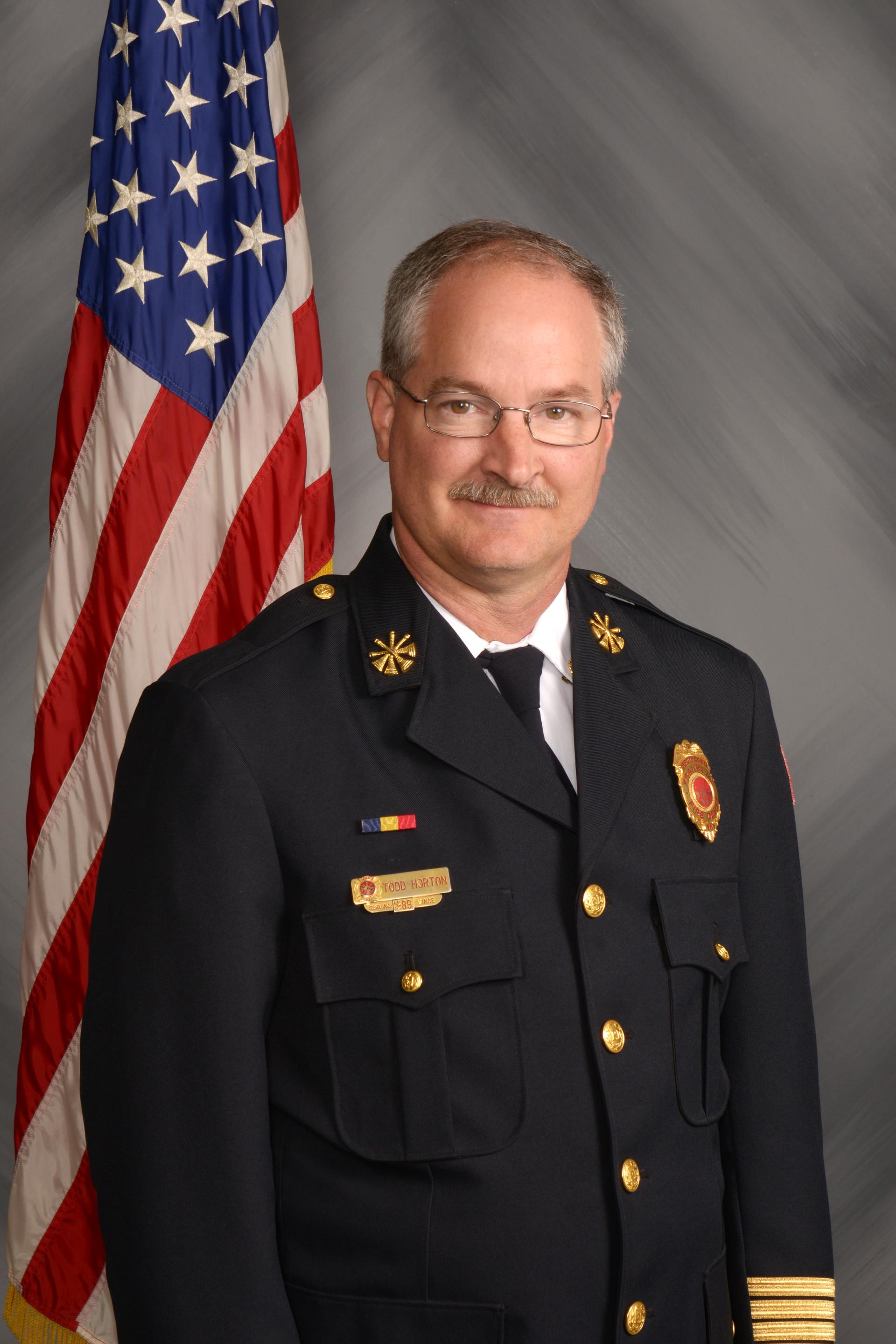 Franklin, TN —After nearly 30 years with the Franklin Fire Department, Deputy Chief Todd Horton has announced his retirement. He will be honored at a reception on Thursday, April 25 at 2 PM in the boardroom of Franklin City Hall, 109 3rd Avenue South.

Deputy Chief Horton will leave the city to accept the position of Director of the Williamson County Emergency Management Agency.

A Franklin, TN  native, Horton began his firefighting career just after graduating from Franklin High School.  He started as a volunteer firefighter for the Williamson County Rescue Squad, which his father, Donnie Horton, helped found.  He was hired by the Franklin Fire Department in 1989 by Fire Chief Mark Riggsbee.

Horton worked his way through the ranks, serving as a firefighter, engineer, lieutenant, captain, assistant chief, deputy chief, and even acting chief.  In his present role he serves as Deputy Chief of Administration and Emergency Management.

Throughout his career, Horton has made countless contributions to the Franklin Fire Department and the City of Franklin.  He was instrumental in improving the city’s fire protection rating with the Insurance Services Office (ISO), achieving the top rating of ISO Class 1 in 2015.

Additionally, Horton has overseen the construction of several fire stations and the purchase of multiple apparatus and pieces of equipment for a city that has quadrupled in size during his tenure.

Horton said his most memorable fire department calls occurred early and late in his career.  His early memorable calls include rescuing a man from a house fire, who unfortunately passed away days later.  They also include falling through a compromised roof, then falling off a roof due to icy conditions, both while fighting structure fires.  When he fell through the roof he landed in a room filled with heavy smoke, without his breathing apparatus.  When he fell off the roof he landed in a dumpster.  He said he was blessed that he did not sustain significant injuries in either incident; both could have been deadly.

His later memorable calls include the May 2010 flooding.  Horton helped manage the tremendous response to that event, which involved evacuating more than 400 people by boat from flooded areas.  Additionally, following the event, Horton was the city’s designated FEMA liaison, managing efforts to recover the city’s costs related to the Major Disaster Declaration.

Another significant, more recent incident occurred August 15, 2014, when a fatal gasoline tanker explosion on I-65 destroyed the Goose Creek Bypass-Peytonsville Road overpass bridge.  This resulted in the loss of a critical connection used by emergency services to reach southeastern Franklin, increasing response time by more than 30 minutes.  As an emergency measure, Horton coordinated the establishment of a temporary fire station that very day inside the Williamson County Ag Expo Park building.

There is still a temporary station on the grounds of the Ag Expo Park today.  Known as Station 7, it now includes a mobile home for firefighter quarters and a pole barn for the apparatus. Horton coordinated this effort, along with Assistant Fire Chief Glenn Johnson.  A groundbreaking ceremony for the permanent Station 7 will take place April 23, 2019.  As he did for other new stations, Horton has served as the Station 7 project lead, coordinating with architects on the station’s design.  It’s expected to be completed next year.

Horton’s other recent accomplishments include overseeing the implementation of the 700 MHz radio system expansion project, the purchase this year alone of two 100’ aerial platforms, one heavy rescue, one technical rescue, one hazmat unit, and one new engine.

Horton has received multiple awards, including two for recent deployments.  In 2016 he was deployed to Sevier County for the wildfires that claimed 14 lives, destroyed or damaged 2,545 homes and businesses, and burned 17,904 acres.  Horton assisted the incident management team in overseeing fire suppression, grid search, tree removal and apparatus staging activities.  He was also deployed to southeast Texas in 2017 to assist with relief efforts following Hurricane Harvey.

Franklin Fire Chief Rocky Garzarek said, “Very few people dedicate themselves to their job in the manner Deputy Chief Horton has over the past 29 years.  We will forever be grateful for his endless hours of hard work, service, and commitment as a tireless professional, loyal comrade, and faithful friend.  To say we will miss him does not seem to sufficiently express how much he means to us, our department and our city.  We wish him well in his new role and know he will have many more years of great achievements.”

Franklin City Administrator Eric Stuckey said, "We are grateful for Deputy Chief Horton’s countless contributions to the community and to our City team over the past 29 years.  While we will miss Chief Horton as a part of our City team, we know he will continue to serve the community well as the Emergency Management Director for Williamson County.  We wish him the very best and look forward to working with him in his new position."

Horton and his wife Pam live in Thompson’s Station.  They have two daughters, a son-in-law, and a granddaughter.